Cadmium remains indispensable in a host of critical applications 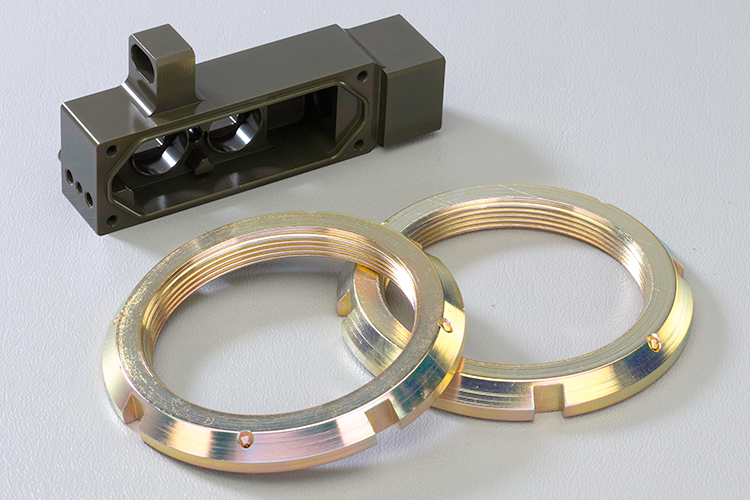 Cadmium has come under heavy scrutiny in recent decades and there's a valid reason why: it is a toxic substance that needs to be tightly regulated and controlled.

However, you’ll find that at Anoplate, we use cadmium as a finish.

While cadmium can be dangerous, banning cadmium as a metal finishing option may actually create more dangers than it prevents. This is because cadmium is often a vital, even life-protecting finish.

We believe it’s important not to blindly ban the use of cadmium, but to promote the responsible and controlled use of cadmium with full awareness for all related environmental and health implications. 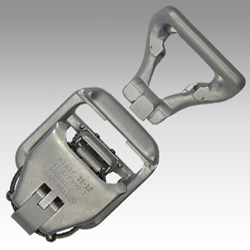 Parachute buckles are an ideal example of the critical advantages of cadmium.

If a parachute buckle fails, it can literally mean the difference between life and death. This became abundantly clear a few years ago when the U.S. Army, concerned about the potential for environmental hazards, eliminated cadmium from its metal finishing requirements and substituted zinc in cadmium's place.

The Army soon discovered that when parachute buckles were exposed to cold, damp environments, those finished with zinc corroded more quickly than those finished with cadmium. The same held true for cadmium's performance in salt, alkali, and tropical environments. The Army learned that no other coating provides the corrosion resistance of cadmium.

The "parachute buckle" case shows that the potential for cadmium pollution must be weighed against the dangers that would arise if cadmium suddenly ceased to be a processing option. Without cadmium, we are unnecessarily risking the lives of hundreds of military servicemen and servicewomen.

What is true with respect to Army parachute buckles - that their failure can be life-threatening - is also true with respect to thousands upon thousands of screws, bolts, nuts, washers, and miscellaneous hardware items used in all sorts of military and aerospace equipment, including Navy ships, submarines, and aircrafts.

So, if cadmium were no longer an option, how would performance and safety be affected? How many lives could be lost? There is no simple answer. But it’s safe to say that, in most cases, cadmium is not arbitrarily used. It is intentionally used because it offers properties that are unique. There's clearly a need for cadmium plating - but we unequivocally concur that its use must be responsible, controlled, environmentally-disciplined.

Cadmium provides tough corrosion resistance in part because the finish is "sacrificial." That is, cadmium "sacrifices" itself to protect the metal it covers. In the face of corrosive substances, the cadmium coating will corrode before the steel or other material it is covering. Many times it provides the corrosion protection of a common (but slightly porous) alternative, electroless nickel.

In a 5% salt spray chamber, for example, an iron part plated with .0005 in. of EN will begin to rust after three hours. The same part coated with .0005 in. of cadmium will withstand 96 hours of salt spray before the cadmium coating begins to corrode, and at least 148 hours before the iron substrate begins to rust. In this kind of highly-corrosive environment, the cadmium finish outperforms EN the way an Indy car outperforms the family sedan. There's just no comparison.

In addition, although cadmium is sacrificial when it corrodes it creates minimal corrosion to products it comes in contact with. This means that cadmium is valuable in machinery whose moving parts must be relatively free of foreign substances.

Cadmium has other properties that can be crucial depending on the application such as good lubricity and conductivity. These properties are the reason why cadmium is specified for the Patriot Missile System used so effectively during the Gulf War and in ongoing military conflicts.

Cadmium's unique properties are the reason the finish is required in a wide range of military specifications.

Here are a few well-known examples: 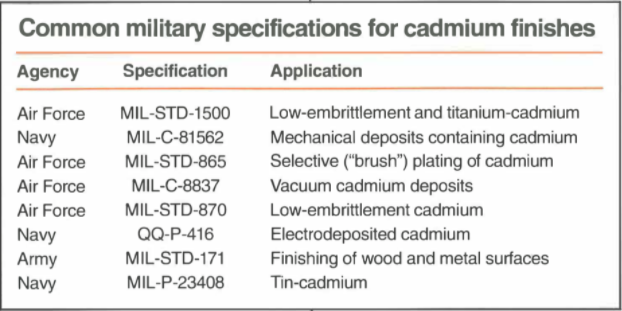 A NECESSARY EVIL - FOR NOW

That said, there are significant potentially hazardous impacts of removing cadmium plating altogether. When it is controlled and used judiciously by conscientious companies with a high degree of environmental integrity, cadmium plating has a vital function. Until new technology allows us to replace it, cadmium plays a role that no other finish can play. 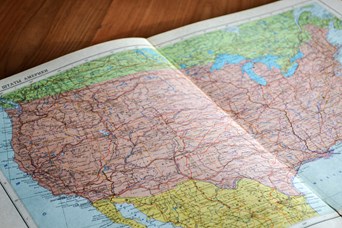 Anoplate's NADCAP accreditation benefits all types of projects in any industry, assuring the job is done to the highest standards in the plating industry.