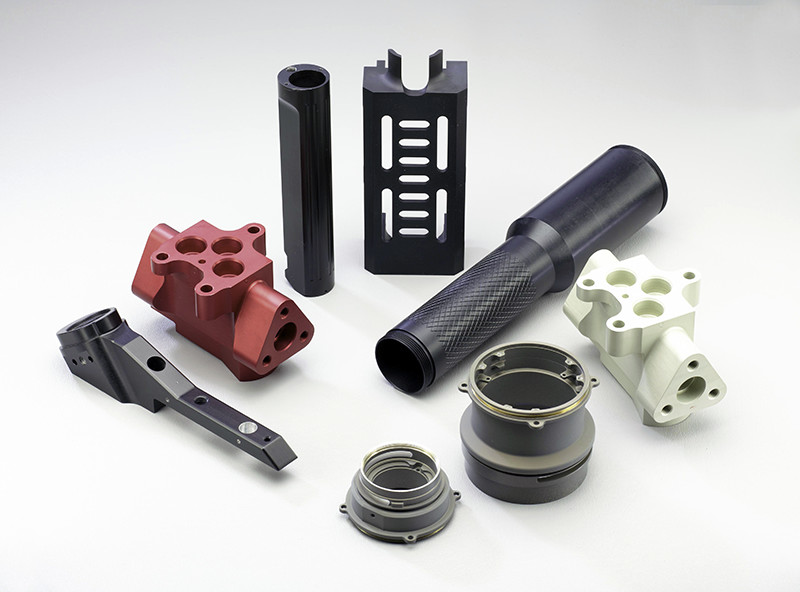 Anodizing is an electrochemical conversion process that forms an oxide film, usually on aluminum, in an electrolyte (chemical solution). The aluminum parts are the anode (thus the term “anodizing”) and current is passed between them and a cathode, usually flat aluminum bars, through the above mentioned electrolyte (sulfuric acid is most commonly used). There are different types of anodize, most commonly referred to as Type I-Chromic Acid Anodize, Type II-Sulfuric Acid Anodize, and Type III Hard Anodize or Hardcoat from the Mil-A-8625 designation. Other less common types are phosphoric acid and titanium anodize. The anodize is a porous structure that grows out of the base aluminum and absorbs colored dye very well. This is done through a secondary operation with either an organic or inorganic coloring. Anoplate processes black, blue, red, gold, as well as small lots of green and gray using standard organic dyes. We also do electrolytic coloring (Anoplate’s AnoBlack EC & EC7) which produces a gray-black color using inorganic metallic salts. Any colored anodize is required to be sealed following processing in order to preserve the color.

Chromic acid anodizing or type I anodize results in the thinnest anodic coat of the principal three types; typically on the order of .00002”-.0001” (20 to 100 microinches) per surface. While thin, when properly sealed chromic anodize affords the aluminum equal corrosion protection to the thicker sulfuric and hardcoat type anodize. Chromic anodize appears much grayer in color and being thinner absorbs less color when dyed. This limits chromic acid anodize as a decorative finish, however, it can be dyed black for use as a non-reflective, protective coating on housings for optical components. Even black dyed chromic anodize is lighter in appearance (grayer), than conventional sulfuric black anodize. In order to get chromic anodize to accept black dye, the temperature of the chromic acid must be raised, therefore, it isn’t done every day and must be scheduled accordingly.

Boric-Sulfuric Acid Anodize (BSAA) is an alternative to chromic acid anodize (CAA) due to the environmental, worker safety and health concerns and the related costs associated with continued use of hexavalent chromium-bearing processes such as CAA. Primary applications include aircraft and aerospace components. It is covered by MIL-A-8625, Type Ic and aerospace specifications including Boeing's BAC 5632. It is used for corrosion protection and paint adhesion. Paint adhesion is equal or superior to chromic acid, and the process is more energy-efficient than chrome-based processes.

The sulfuric acid process is the most common method for anodizing. The sulfuric acid anodize process films range from .0001"-.001" thick. The overall thickness of the coating formed is 67 percent penetration in the substrate and 33 percent growth over the original dimension of the part. It is particularly suited for applications where hardness and resistance to abrasion is required. However, where parts are subjected to considerable stress, (such as aircraft parts), the possible presence of the corrosive acid residue is undesirable. The porous nature of sulfuric acid films prior to sealing is used to particular advantage in the production of colored surface finishes on aluminum and its alloys. The porous aluminum oxide absorbs dyes well, and subsequent sealing helps to prevent color loss in service. Although dyed anodized films are reasonably colorfast, they have a tendency to bleach under prolonged direct sunlight. Some of the colors are: Black, Red, Blue, Green, Urban Grey, Coyote Brown, and Gold. Parts can be treated chemically or mechanically prior to anodizing to achieve a matte (non-reflective) finish.

Hardcoat anodize, while usually done in a sulfuric acid based electrolyte, is much thicker and denser than the more conventional sulfuric anodize. Hardcoat is specified for aluminum components subject to extreme wear applications where superior abrasion resistance is needed, or corrosive environments where a thicker, harder, more durable coating is necessary. It can also be valuable where enhanced electrical insulation is required. Since hardcoat anodize can be built up to several thousandths in some cases, it makes this type of anodize a candidate for salvaging worn or mis-machined components.

Titanium Anodize refers to the controlled creation of an oxide film on the surface of titanium parts. Titanium anodize is used for many reasons, from part identification in the medical device community, to corrosion control and bonding in the aerospace community. Depending on the grade of titanium alloy, it can be anodized many different colors, however Anoplate only offers this finish in a blue-gray finish.

Anoplate has been relied upon to offer this finish to AMS 2488 Type II and a variety of unique customer specifications.

The purpose of anodizing is to form a layer of aluminum oxide that will protect the aluminum beneath it. The aluminum oxide layer has much higher corrosion and abrasion resistance than aluminum. The anodizing step takes place in a tank that contains a solution of sulfuric acid and water. After anodizing is complete, the parts can be immersed in an optional coloring tank, to achieve a deep black tone instead of the standard clear or silver finish.

For questions or more information on any of our finishes and custom coatings, or to get started on selecting the right finishes for your project Contact Us Today.

AnoBlack EC is an electrolytic coloring process for blackening anodized aluminum alloys. Blackening is accomplished using inorganic metallic salts (not organic dyes) and thus is 100% smut-free and will not fade under extremes of light or temperature.