By offering outstanding thermal and corrosion resistance as well as being a more environmentally-friendly alternative to cadmium, zinc-nickel is increasingly being used in applications such as aircraft landing gear, railway switching gear and electrical connector shells. It provides sacrificial protection of steel and aluminum and it is harder, thus more durable, than softer zinc or cadmium.

Without using a supplemental hexavalent chromate, Anoplate’s Zynik II plated parts can be expected to withstand 250 hours to white rust and 1,000 hours to red rust (and then some!) in conventional ASTM B117 accelerated corrosion salt spray tests. Coupled with the low hydrogen embrittling characteristics of this particular zinc-nickel chemistry, Zynik II is starting to gain momentum from some anticipated markets as well as some unexpected ones. 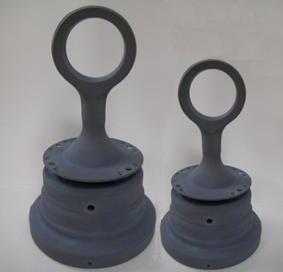 What is it about zinc-nickel and in particular Zynik II that makes it so unique? First of all, when one starts considering zinc-nickel deposits, there are a whole host of offerings. Much like electroless nickel-phosphorus alloy plating which sprung to prominence in the 1970’s, different formulations and the resulting deposit compositions result in varying physical properties. Acid zinc-nickel formulations result in brighter, more leveled deposits which tend to be more decorative and visually aesthetic. This makes them more appealing as a clear coating or can be easily blackened. The drawback of a bright, leveled deposit is that when it comes to hydrogen embrittlement, they are less forgiving and more susceptible to failure due to embrittlement. Furthermore, upon crimping – as many tubular parts for the automobile industry or electrical connector shells require – these deposits can crack, compromising their corrosion resistance. Alkaline deposits of zinc-nickel with lower nickel contents can be made to be brighter with lower stressed deposits which permit mechanical deformation without cracking. Having lower nickel content, these deposits do not offer the corrosion, abrasion and embrittlement resistance that deposits with 12-16% nickel like Zynik II do. Truth be told, however, it’s certainly not the prettiest of coatings. It’s a flat, matte appearance with a typical blue-grey coloration. If it’s pretty you desire, remember we’ve warned you!

When Anoplate began considering entering the zinc-nickel market 3 years ago, we spoke to 4 chemical suppliers, interviewed a host of plating shops then offering zinc-nickel and reviewed dozens of specifications on the coating. The result of this investigation led us to select Dipsol’s IZ C17+ process. This supplier’s chemistry and technology was similarly selected by leading aerospace manufacturers including the US Air Force, Bell Helicopter and Boeing as well as landing gear manufacturers Goodrich and Heroux-Devtek. From a modest 85-gallon prototype intial installation, Anoplate was able to develop the process control finesse and analytical acumen needed when early in 2014 when Anoplate installed a dedicated, 16 tank line which can accommodate parts up to 72 inches long, 28 inches wide, and 43 inches in depth and weighing up to 1 ton.

Anoplate’s Engineering Staff have presented the benefits of zinc-nickel to audiences as far as Texas and as near as Liverpool, NY, including a couple of aerospace divisions of United Technologies (UTC). Anoplate’s Nadcap Scope of Approvals has been broadened to include zinc-nickel plating, primarily AMS 2417, as well as several corporate specifications.  Anoplate has received zinc-nickel plating approval and / or processed work from Bell Helicopter, United Technologies Aerospace and Lockheed Martin.

The unique benefits of Zynik II haven’t gone unnoticed by other applications other than aerospace. A number of bearing manufacturers who have relied on cadmium for decades are switching to zinc-nickel due to its synergistic combination of corrosion resistance and ability to stave off hydrogen embrittlement on high strength steel commonly used for bearings. We’re also pursuing applications where the rigors of corrosion push zinc, cadmium and other zinc alloys beyond their limits. Whether it’s the chemical processing industry, oil and petroleum applications or the underside of railcars, Anoplate’s Zynik II offers a surface engineering solution ready to take off!