What is Colorized Anodize?

Electro-chemical oxidation of aluminum in a sulfuric acid electrolyte results in a thin, porous layer of aluminum oxide. Those pores are a perfect receptor for organic dyestuffs; the same dyestuffs used to color printing ink, plastics and textiles.  Nearly any color can be incorporated into a properly anodized layer with the exception of white.

One of the limitations of organic dyes is that they can begin to fade when exposed to light, temperature and/or certain chemicals.  The ability to resist fading is termed fastness and is rated from a low of 1 to a high of 10. Just because a particular black dye has a lightfastness rating of 9 does not mean that it will hold up to high temperatures or chemical exposure.

Equally important when it comes to colored anodize withstanding exposure is the step after dyeing, namely sealing. While the anodic pores are good receivers of colorant dyes, without sealing the dye can leach back out or degrade upon light, heat and/or chemical exposure. By exposing the freshly dyed anodize surface to a proper sealant, most commonly a solution of nickel acetate, the surface oxide is hydrated and swelled such that the pores are in essence closed over thus retaining the dye.

Colored anodize is referred to as Type II, Class 2 as specified by the military specification governing anodize, MIL-A-8625. Typically Type II sulfuric anodize ranges from 0.0002” to 0.0010” thick. Thinner Type I anodize is too thin to absorb enough dye to be fully colored. Type III or hardcoat is typically too dark and dense to be successfully dyed other than black. 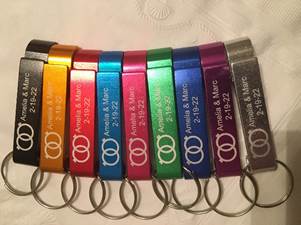