The Trouble with Tin: Get the Lead Out!

At the recently concluded Sur/Fin 2000, the annual technical conference and exhibit of the American Electroplaters and Surface Finishers Society, an entire afternoon session was devoted to on-going efforts to get the lead out of tin deposits.

In fact, the whole electronics industry is currently pushing to remove lead from all devices, whether it is in a plated coating or a soldered joint. (Recall that solder is typically an alloy containing 60% tin / 40% lead by weight.)

Lead removal is not a new initiative. Within the last decade, the plumbing industry was mandated to eliminate use of leaded brass and bronze in the manufacturing of faucets for potable water. A couple of decades ago, lead was removed from paints and gasoline, two media where public exposure to lead represented a major health threat.

However, where non-leaded anti-knock compounds could be used as fuel additives, and non-leaded paint pigments could be readily substituted, lead-free solder alternatives have simply not caught on. 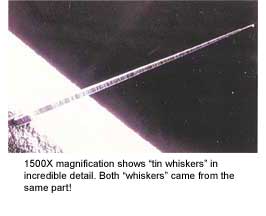 Not so long ago, Raytheon, the huge missile builder, (whose products include the Scud-busting Patriot missile of Desert Storm fame) ran into intermittent misfire problems. Following an exhaustive failure analysis, which included high magnification electron microscopy, the Army pinned the cause on "tin whiskers."

"Whiskering," a natural-occurring phenomenon not known outside of the electronics industry, results in the spontaneous and unexplainable growth of tiny, needle-like protrusions. Such "whiskers" are known to grow on tin, as well as on cadmium and zinc. Because they tend to be small, on the order of 40 millionths of an inch in diameter and 100 millionths of an inch in length, in typical applications of zinc and cadmium these "whiskers" don't result in component failure. However, as highlighted at a Rockwell Electronics supplier symposium this Spring, there are 3 reasons why "tin whiskers" are a problem for Rockwell:

Controlling "Whiskers" - AnoTin Alloy Coatings
In 1956, Arnold and others first bought attention to "whiskers" in his presentation at the Platers' Technical Conference. In the more than 40 years since, metallurgists and scientists still cannot agree on why "whiskers" occur. The predominant theory is that it is related to a material's ability to relieve compressive stress inherent to the deposit or present in the basis metal. "whiskers" can also occur in stress-free deposits that are externally stressed by fastener insertion, for example.

One method of minimizing the potential for "whisker" formation is to co-deposit the tin with either lead or bismuth. The most common practice is to use 60/40 tin/lead, however, some military specifications suggest that as little as 3% by weight lead will mitigate the "whisker" effect. In the case of bismuth, the amount necessary is much less. Both IBM and Rockwell specifications mandate 0.3% by weight minimum to control "whiskers." Anoplate's "AnoTin Bi" is a bismuth-doped tin alloy deposit that meets both IBM and Rockwell's standards; Anoplate is an approved supplier for both firms.

All are in agreement that re-flowing of the deposit reduces the potential for "whiskers" to grow.

Typically, this is done by immersing freshly plated components in a 460 degree F oil bath for 10 to 15 seconds. The tin melts, smoothes the surface, and removes grain boundaries. The result is a brighter, nearly stress-free tin coating; however, no pure tin coating is completely immune to "whiskers."

Not surprisingly, European environmental interests are driving much of today's lead-free initiative. Smith and Swanger in the March 2000 issue of "Transactions of the Institute of Metal Finishing," reported the toxicity and leachability of various lead-free solders. They studied 8 alternative formulations containing such elements as silver, copper, antimony, indium, and bismuth in addition to tin.

Using not only the Environmental Protection Agency (EPA) TCLP leaching methodology, but also those methods mandated by the regulatory agencies of California, Japan, and the European Community as well, the authors concluded that all the alternates, except tin-bismuth, exceeded regulatory limits for leachability. Their conclusion: "Lead free solders are not a panacea for solving the potentially toxic effects from tin-lead solder alloys."

Anoplate continues to offer both 60/40 and 90/10 tin-lead alloy deposits in addition to tin-bismuth, matte tin, and bright tin.

For a discussion on your electronic finishing application Contact Us Today.