Anoplate Is One Of Top Finishing Shops In North America 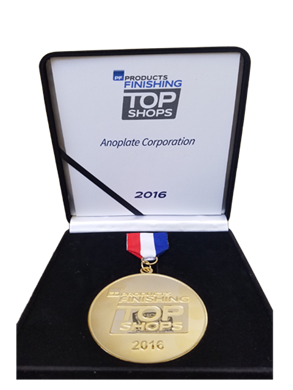 CINCINNATI, Ohio ‑ Anoplate has once again been named one of the best finishing shops in North America, according to an industry benchmarking survey conducted by Products Finishing magazine, a trade publication which has covered the industry since 1938.

Only the top 50 shops were given the honor of being a Products Finishing magazine ‘Top Shop’ based on a scoring matrix in those four criteria.  2016 marks the second year that Products Finishing has conducted this survey and Anoplate has been named a Top Shop for both 2015 and 2016.

“Anoplate has established itself as one of the best finishing operations in the industry,” said Tim Pennington, editor of Products Finishing magazine. “The criteria we used was very stringent, and only the top finishing shops that excelled in all four areas made the list.  Anoplate is in rare air when it comes to finishing operations.”

“For the second year in a row, we are extremely excited and pleased to be named one of Products Finishing magazine’s ‘Top Shops’,” said Jim Stevenson, President and CEO of Anoplate. “Our employees and management team work very hard to be the best in the industry, and to provide our customers with quality service delivered on time as promised.”

Anoplate's NADCAP accreditation benefits all types of projects in any industry, assuring the job is done to the highest standards in the plating industry.