Q: We recently sent you a group of parts to be electroless nickel plated and upon return noted that they exhibited missing or flaking plating on the ID. What happened? 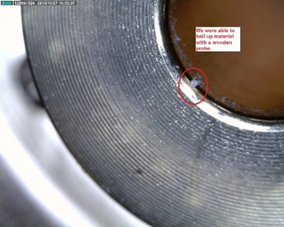 A: Upon microscopic examination of the returned parts, there was noted a white “glob” at the top edge of each of the parts. Using a wooden stick the material could be mechanically separated from the part exposing raw, untreated substrate material beneath. We chemically removed the plating from a couple of parts and the “glob” was untouched indicating that the white material was not typical plating salts or residual alkaline cleaning salts. Upon further discussion with the customer, they indicated the parts had undergone a final deburring using an abrasive nylon brush. Such brushes are becoming popular over wire filament brushes due to their ability to encapsulate more abrasive particulates including aluminum oxide, silicon carbide or even diamond. They are composed of heat stabilized nylon and abrasive grains that are then coextruded into monofilament brushes containing about 30% by weight of the abrasive. Used at the proper speed and ensuring that there is sufficient abrasive remaining, they function well, however, as the abrasive content is depleted and the machinist extends the deburring time to compensate, there can be a tendency for the nylon to be overheated and leave melted nylon residue on the otherwise deburred part. As the old chemist adage goes, “like dissolves like” and as plating houses only use inorganic chemicals in cleaning and activating parts for subsequent plating, the nylon remains intact and acts like a maskant preventing the area beneath from being plating. The fact is, even using an organic solvent like alcohol or MEK or trichloroethylene, burnt on nylon is pretty inert and unaffected by simple chemical cleaning. In the end we ended up stripping the parts, returning them to the customer to be deburred using new deburring brushes and returned to Anoplate for re-plating without issue.